Latino population living in the US

According to officially announced U.S. Census Bureau population estimates, the Latino population in the United States hit a record of over 60.47 million in 2019, up 930,000 from the previous year and up from 50.7 million in 2010.

Latinos continue to play a crucial role in the country’s overall demographic picture. Between 2010 and 2019, the Latino population of the United States grew from 16 percent to 18 percent. During this time, Latinos accounted for over half (52%) of all population increase in the United States. They are the second-largest ethnic or racial group in the country, after white non-Hispanics.

With 4.9 million Hispanics in 2019, Los Angeles County has more Hispanics than any other county in the United States. Harris County, Texas (2.1 million) and Miami-Dade County, Florida (2.1 million) had the next-largest Hispanic population (1.9 million). In 2019, 11 counties had a population of more than a million Hispanics. Maricopa County, Arizona; Cook County, Illinois; and Riverside County, California were among them. In 2019, Hispanics made up at least half of the population in 104 U.S. counties. 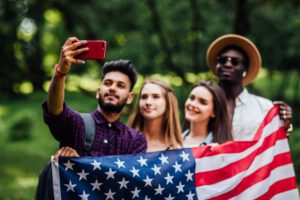 How does the Latino population celebrate Thanksgiving?

As you know, Thanksgiving is widely associated with mashed potatoes, turkey, cranberry sauce, and a variety of other classic American meals.

Latinos, on the other hand, may have a slightly different Thanksgiving feast and celebration. Thanksgiving is often called “Dia de Acción de Gracias” or “Dia de Dar Gracias.” However, the name and activities are frequently a tailored combination of Hispanic and American traditions among Latinos.

Even though Thanksgiving is not observed in Latin America, many Hispanics in the United States have a unique affinity for the holiday and the day of thankfulness. Hispanics frequently incorporate traditional foods from their home cultures into their cooking.

Regardless of nationality, there are a few common themes that most Latino people follow. Instead of conventional stuffing, most Hispanics fill their turkeys (pavo, guajolote {Northern Mexico}, guanajo {Cuba} ) with additional protein. Any form of meat can be used as an added protein, although chorizo, pig pieces, bacon, or ground beef are popular choices. Rice is a staple dish for Hispanics at every meal, and it may be found in various forms, including yellow rice, white rice, and even as a dessert, arroz con leche. Music and dancing usually take the place of football games and parades. 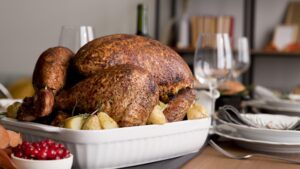 Turkey on the table for Thanksgiving Day

Tips for your Latino Patients on How to celebrate Thanksgiving during COVID and some suggestions in Spanish:

Since many will be celebrating with family and friends, you may want to gently remind your Latino patients of the CDC recommendations (Please find a simplified Spanish version below each one):

Protect those not yet eligible for vaccination such as young children by getting yourself and other eligible people around them vaccinated.

*Wear well-fitting masks over your nose and mouth if you are in public indoor settings.

*Outdoors is safer than indoors.

*If you are sick or have symptoms, don’t host, or attend a gathering.

*Get tested if you have symptoms of COVID-19 or have close contact with someone    who has COVID-19.

And lastly, remind your Latino patients that by following these guidelines everyone can enjoy a safe holiday, and protect the health of family and friends.

Thanks for subscribing! Please check your email for further instructions.

Something went wrong. Please check your entries and try again.